The Sinclair C5 as it Should Have Been 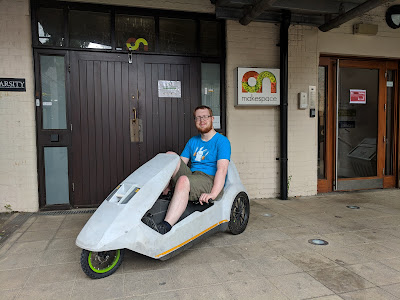 It began in 2013 when I went for an interview in Cambridge, UK and stopped over at a friends house to catch up. He’d gone and bought a working Sinclair C5 from a local collector for £250 and I had a ride around his road in it. Despite my head being at the same high as the wing mirrors of all the cars on his street it was hilarious, to be zipping along, that close to the ground, with such little effort. It was then I knew I wanted a silly electric vehicle to call my own!

One of the things that really struck me was how futuristic, and battered, but mainly futuristic it still looked despite being released in 1985. As my friend remarked, it looked “very future”. However that was only skin deep. The original motor had been the best in DC motor technology at the time but these days brushless motors are the ‘in’ thing. With their compact size and high power-to-weight ratios I knew I needed one in my silly electric vehicle.

I’d been wanting to build a go-kart for a number of years but finding the space and time to get started was difficult. I also lacked a welding setup to get the chassis made up. I decided that buying a Sinclair C5 was a nice way of getting a rolling chassis very quickly and I’d get a very cool looking vehicle I could upgrade.

My first bit of luck came when I found an eBay auction for 26 eBike batteries for spares or repairs. These broken batteries, a mix of 36V 10Ah, 12Ah and 16Ah packs, would be ideal for electric vehicles assuming enough working cells could be rescued. I won the auction for £125 and trekked over to the otherside of Milton Keynes to pick them up. Once I got them back to my local hackspace, Cambridge Makespace I started to test them and found that aside from 2 dead packs the rest only had damage to the enclosures, the batteries were fine and in some cases completely unused. 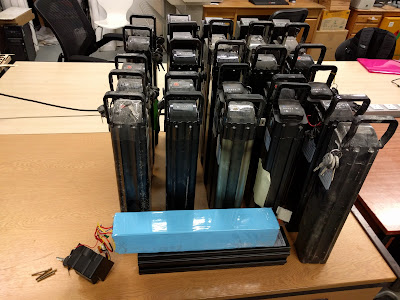 Now I had a power source I still needed the chassis. It took quite some time before a Sinclair C5 went up on eBay for a price I was willing to pay. As I was planning on replacing all of the electronics I was hoping I could get one for less than £150. Eventually, after a few failed bids I won an auction for a rather disheveled Sinclair C5 for £72. It was missing the lights, the storage boot and all the electronics but I figured it was just right! I ended up buying the boot a bit later on for £100 and the rear light for £20. 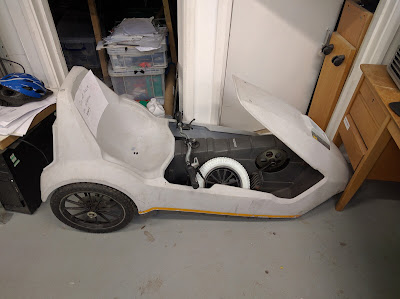 The first thing I replaced on the chassis was the front wheel. The original had standard bicycle caliper brakes and a plastic rim wheel. If you used the brake too much the plastic rim would melt and warp. The tyre would then blow out and you would have a very bad time™. So thanks again to eBay I bought an aftermarket modification that would give me a metal rim wheel and a disk brake. 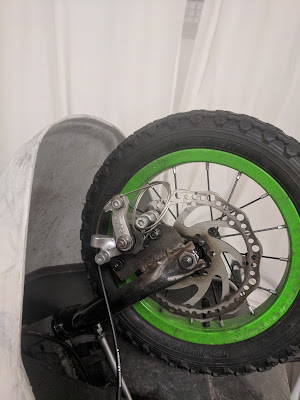 It was now May 2016 and I wanted to get the C5 running in time for Electromagnetic Field, a hacker camp in the UK countryside held in early August. I already had a suitable motor, an Alien Power Systems 6374 170kv 3.2kW motor however this motor would be too fast.

Brushless motors are usually described with a ‘kv’ rating, this stands for Motor Constant which is the RPM per Volt. By powering my 170kv motor from my 10 cell battery packs I would get a nominal 6290 RPM. The original C5 had a reduction of 1:3.8 with 16” wheels which would theoretically get me up to 80 miles an hour. Except I just wouldn’t have the torque to get to that speed. So my urgent requirement was to build, and test, a mount for my motor that would fit the Sinclair C5 as well as reduce the motor speed by approximately half.

It took a few late nights but eventually I came up with a mad idea, the outside of the gearbox could fit into the original motor mount, and as long as the output shaft wasn’t central that would provide an easy way to tension the drive belt. The second mad idea was that the outside of the gearbox didn’t actually have to be metal, I could just make it from stacked laser-cut wooden sheet. 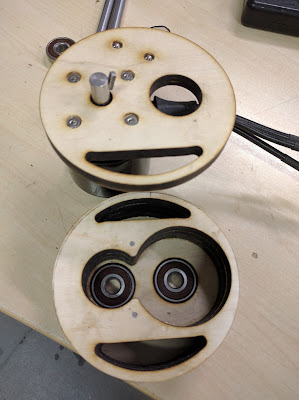 I found some 9mm laser plywood lying around the hackspace and I knocked up the design in Fusion 360. I integrated motor mounts, hall effect sensor mounts, holes for bearings, lightening holes which doubled as hand grips and securing holes. It held 2 steel gears together, one mounted to the motor shaft, one on an idler shaft. This gave me an 1:1.83 reduction ratio which would reduce the top speed to a slightly more achievable 43.3 miles per hour. 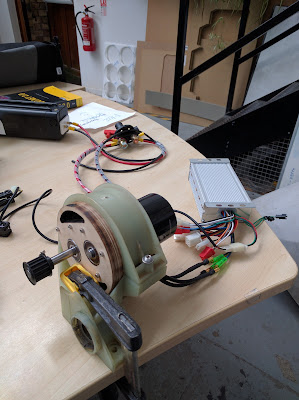 During EMF Camp this worked really well. I used the C5 off road every day of the camp and it handled it amazingly. Occasionally a few bolts needed re-tightening and the bearings required some bearing restraints stapling into the wood but that was it for maintenance. Once I got the C5 back to Cambridge it managed to get up to 27 miles per hour, 7 mph above the UK speed limit for electric bicycles. However the gearbox wasn’t sustainable. Even with the gear reduction I had to pedal start the C5 otherwise the drive belt would slip on the tiny drive pulley and make an outrageous farting noise. I started plans for a larger gear reduction, possibly even a planetary to handle most of the speed reduction so the belt would become more of a way of coupling drive power to the wheels.

But it was at this point Robot Wars was resurrected by the BBC and as something of a lifelong dream of mine I dropped everything to become a part of this. The Sinclair C5 project was on pause.

Eventually I managed to pull myself out of Robot Wars preparations. In the meantime I’d managed to buy a NEMA 23 5:1 gearbox with the intention of fitting it to the Sinclair C5 as the main speed reducer. I took it apart and built a model in Fusion 360 so I could accurately model brackets and adaptors. This was really helpful when I needed to make the first custom mount, something that would fix it to the 6374 brushless motor. Unfortunately I made a mistake and 2 of the 8 holes on the adaptor ring are drilled in the wrong places and just won’t line up with their counterparts, 6 bolts out of 8 is enough right? 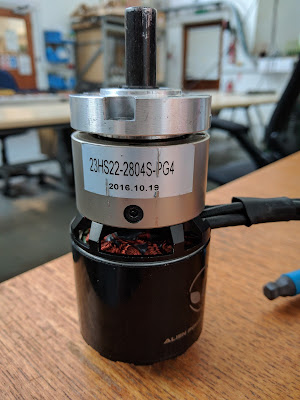 This new gearbox promised great things, by having the main reduction done by gears before the drive belt there was a good chance I’d be able to do powered starts as well as quicker starts in general. But in order to realise this I needed a new motor mount bracket for the Sinclair C5. I spent a long time procrastinating over this; how should the belt be angled, what if I wanted to add a neat design feature etc.

It wasn’t until Tindie/Hackaday announced a meetup in Cambridge that I finally decided to get on with it. I wanted to show the Sinclair C5 off, so I just had to make the bracket as is. I did some work on it the week before the meetup but it was only until the actual week of the meetup arrived that I really buckled down. I worked pretty determinedly, eventually taking the day of the meetup off work so I could really get it working in plenty of time. Everything went pretty well, I had to restrain my desire to make it completely neat and polished simply to get it working. Occasionally I had to abandon my theoretical plan and just bodge a few things, but luckily this was kept to a minimum. However come 4pm of the day of the meetup it was done! 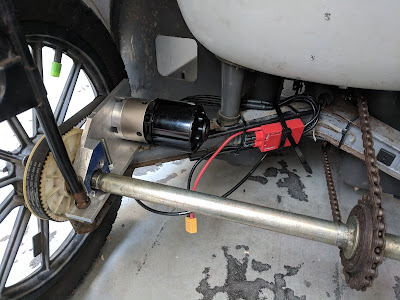 I hopped in, zoomed out of Makespace, and drove across Cambridge, UK attracting quite a few stares and made it to the meetup! The power from the motor cut out a few times on the way there, at the time I felt that the motor had just overheated and needed a bit of a rest. Of course this wasn’t the whole story but I wouldn’t realise this until later...

It turned out that I’d got to the meetup a couple of hours too early, oh well, I’m in a pub, waiting for a meetup, time for a pint! After an excellent meetup hosted by Jenny List and Jasmine Beckett of HackADay and Tindie respectively where I met lots of equally mad people it was time to head home. The motor wouldn’t work the whole way home and so I had to arduously pedal the C5 back to Makespace. Pedaling the C5 is not like pedaling a normal bike, it sucks, really really sucks.

Finally I made it back to Makespace and it was time to inspect the chassis and see why it’d stopped working. 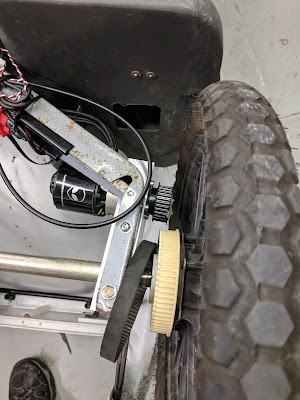 I'd knacked the chassis, bent it like a banana, the cheap, weak Sinclair C5 chassis. It turns out a motor with 14 times more power that the chassis was designed for is a little brutal. I’d also mashed the rear axle bearing in addition to the chassis which explains why the rear axel had completely locked up. 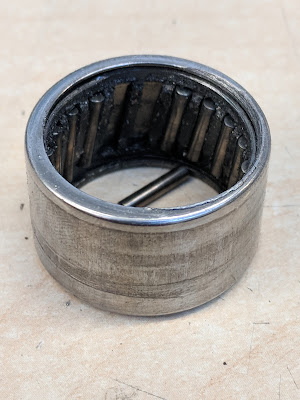 Everything looked recoverable but I’d have to buy a new bearing and while I could bend the chassis back into the correct shape I’d actually popped 2 of the spot welds so it would just bend out of alignment again.

My list of things next to upgrade now included:


As can be seen I only seem to get any productive work done on the Sinclair C5 when I have a deadline so I will be aiming to enter Hacky Racers at EMF Camp 2018.